TNR, also called TNVR (Trap-Neuter-Vaccinate-Return), is a process of managing free-roaming cat populations by trapping cats with humane traps, neutering (or spaying) them, vaccinating them and returning them to their outdoor homes. To understand why TNR is so effective, it’s important to know what happens with unsterilized/unmanaged colonies as well as what other methods have tried but failed to address free-roaming cat overpopulation. 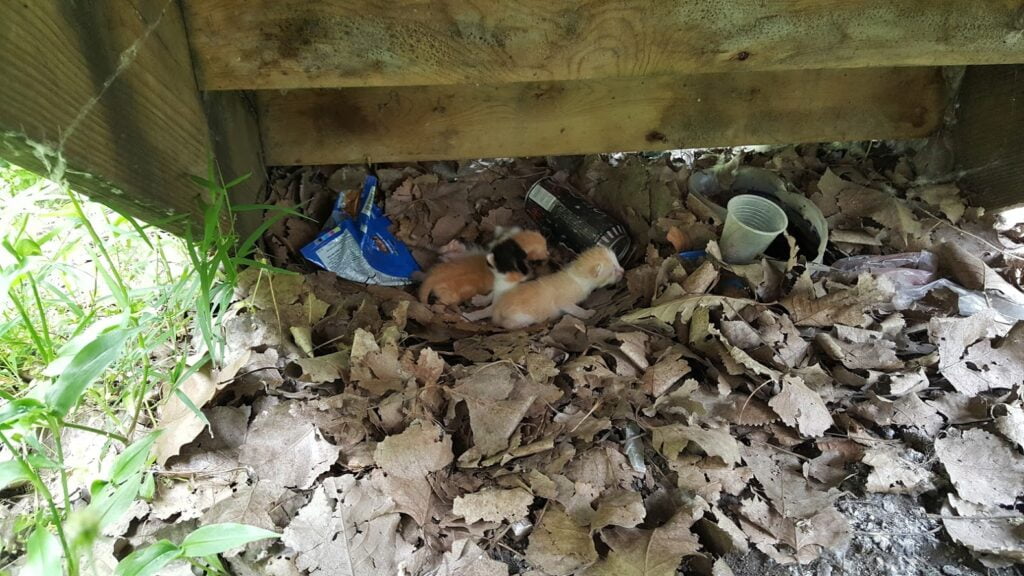 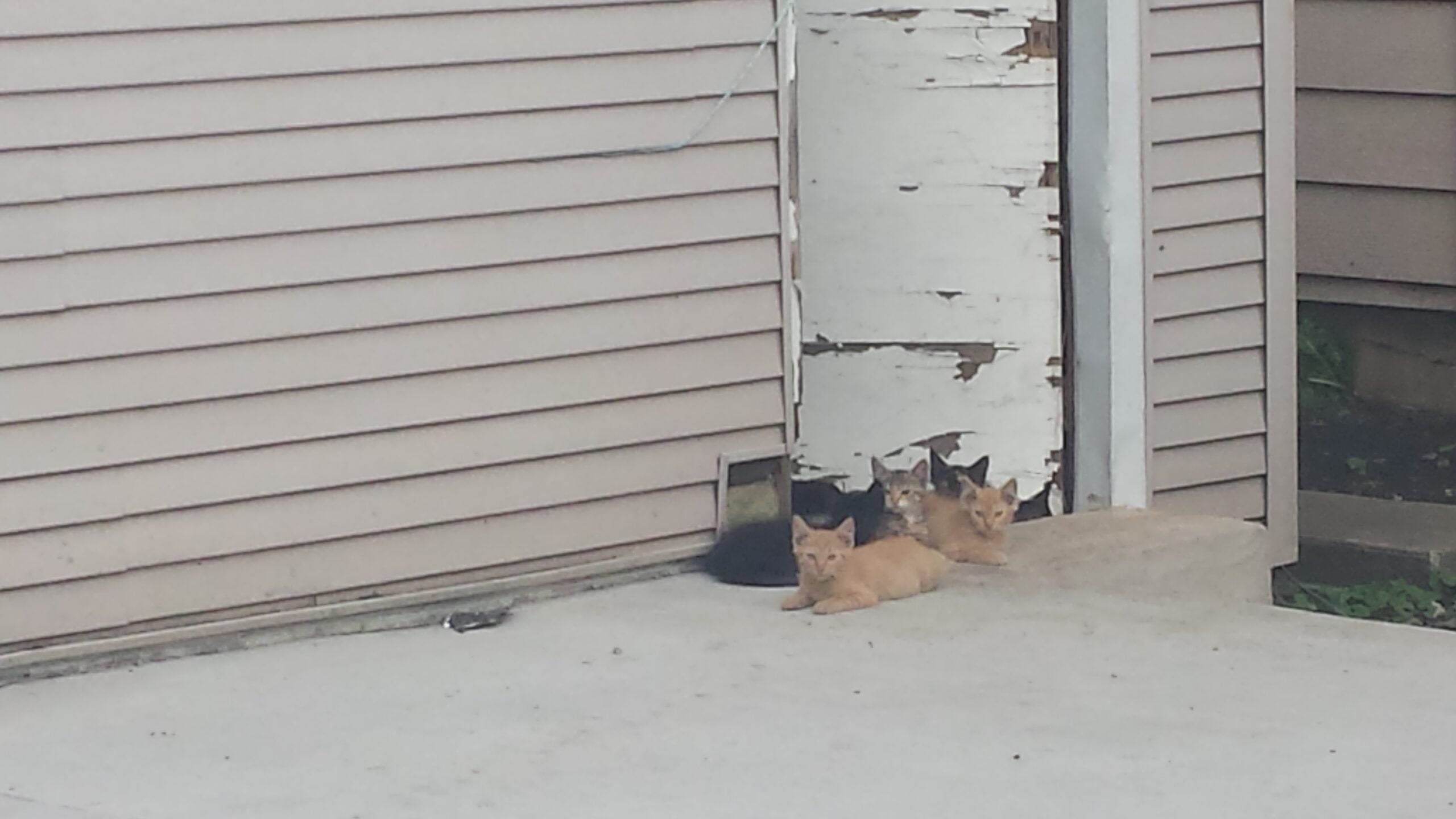 Left alone, free-roaming cat populations reproduce very quickly. Exactly how quickly has been a subject of dispute. Contrary to what many organizations still report, an unsterilized female cat will NOT create 420,000 offspring in 7 years. Carl Bialik, the Wall Street Journal’s “Numbers Guy,” consulted a number of experts in veterinary medicine and wildlife management and did the math in a couple of different ways. Bialik’s estimates range from a low of 98 and a high of 5,000 cats in 7 years. Calculate-this.com’s mathematical model yields similar results: 2905 kittens at 7 years and 49,000 kittens at 10 years. Even if we take the lowest estimate, we can easily see how just a couple cats can rapidly turn into an out-of-control situation.

Female cats can become pregnant as early as 4 months of age and can have as many as 4 litters per year. Queens can become impregnated by more than one male during a pregnancy. It is not uncommon for cats to give birth to upwards of 7-8 kittens and only have 2-3 emerge from the nest. Kittens born outside with no human intervention have a 50-75% mortality rate before reaching 6 months old. Cats that do make it to adulthood live much shorter lives when they are not sterilized, vaccinated and fed regularly.

Foraging for food, noise from fighting and mating and elimination in undesired areas are all nuisance issues that can arise in unmanaged community cat colonies. When cats are sterilized, meal-fed at specific times and have designated areas to do their business, these problems can be eliminated. Whether or not people appreciate community cats, most are in favor of sterilization, as it reduces the number of cats in the community and improves conditions for both humans and cats.

Throughout the years people have tried various methods of controlling outdoor cat populations, with little or no success.

The most prevalent method has been trapping and removing undesired cats. When these cats are feral (wild) and not socialized to people, they are not suitable candidates to be brought inside. Animal shelters cannot adopt out animals that are afraid of people. Historically, feral cats brought into shelters have simply been euthanized.

Municipalities have very limited funds dedicated to animal control. There are not nearly enough resources to round up and euthanize all of the free-roaming cats in a given area. Animal control officers also have many other priorities, such as wildlife removal, dogfighting and animal hoarding.

There are many studies demonstrating that people favor leaving cats in their environment over trapping and killing them:

Even if feral cats can be relocated to other areas, trap-and-remove is an ineffective method of reducing outdoor cat populations due a phenomenon known as The Vacuum Effect:

When members of a species are removed from an area, a void or “vacuum” is created, which other members of that species quickly fill in. 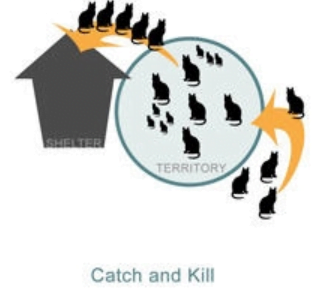 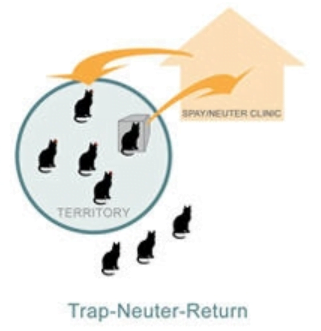 The Vacuum Effect was discovered in cat colonies by British biologist Roger Tabor in 1983, who observed the phenomenon in London street cats.

Relocating feral cats to a new area may sound like a good idea, but in reality it is anything but. Cats are very bonded to their familiar environment. Relocation is extremely stressful for them. Even with a proper acclimation period, there is no guarantee they will stay in their new location. Cats in Action does not support bringing feral cats indoors, as captivity is extremely stressful. Please also read our position statement on Sanctuaries.

Feeding bans are also a fairly common, entirely ineffective policy, and actually contribute to overpopulation. In order for a feeding ban to work, one of two things would need to happen:

In reality, neither happens. Even if caretakers are bullied into withholding food, cats typically stay in the area and become a greater nuisance by desperately foraging through garbage cans. Caretakers more often find creative ways to continue feeding, obscuring feeding areas and feeding at odd hours. Because preventing caretakers from feeding hinders trapping efforts, feeding bans usually wind up bringing even more unsterilized cats into the community. See additional information.

TNR works because feral cats are territorial and very bonded to their environment. Sterilized cats, when properly meal-fed, defend a territory against newcomers. Those newcomers then move on to other areas where they can be caught and sterilized. Managing a feral cat colony is not an exact science, but generally speaking the colony population does not expand beyond the food supply, and decreases over time through attrition. Because caretakers are monitoring the colony every day, they are in a good position to quickly trap and sterilize any newcomers that do show up.