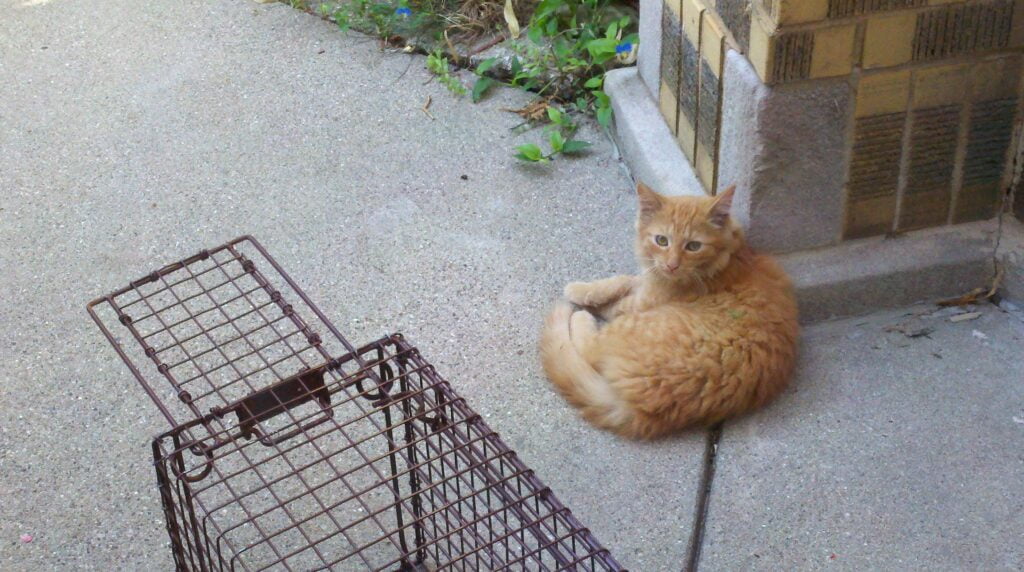 Cats are not “smart.” Their brains are not sophisticated enough to understand that you’re trying to catch them to spay or neuter them. But they may be wary of the presence of new equipment in their environment or be reluctant to enter a confined space like a trap. In these situations, there are several options. A TruCatch FatCat 30FCD trap is both wider and taller than a standard trap. FatCat traps are great for trapping big-headed tom cats, injured cats and very pregnant cats. In Chicago, Tree House Humane Society has FatCat traps for lending.

Trap conditioning is a very effective method of gradually conditioning cats to eat inside of a humane trap. Begin by placing the trap where you normally feed cats and tie the doors open with a string or bungee cord so it doesn’t accidentally trip. Place food in front of the trap, but not inside. Cats will get used to seeing the trap and it will become part of their environment. Slowly move food into the trap a few inches each day.

Go at the cats’ pace. If cats won’t eat the food, back it out a bit until they do, then start again to keep moving the food further into the trap. Once the food is all the way in the back behind the trip plate and cats are eating inside the trap regularly, remove the string/bungee cord and set the trap. Several traps are usually needed with larger colonies, to spread out food so cats don’t fight over it. Multiple traps will also increase trapping success and enable you to better make clinic appointments. Trap conditioning is a very successful methodology. It  usually only fails when people aren’t disciplined enough to stick with it, or when people feed outside of the trap.

Drop Traps are also very useful in catching trap-wary cats. They are also ideal for trapping one cat in a colony of many already-sterilized cats. 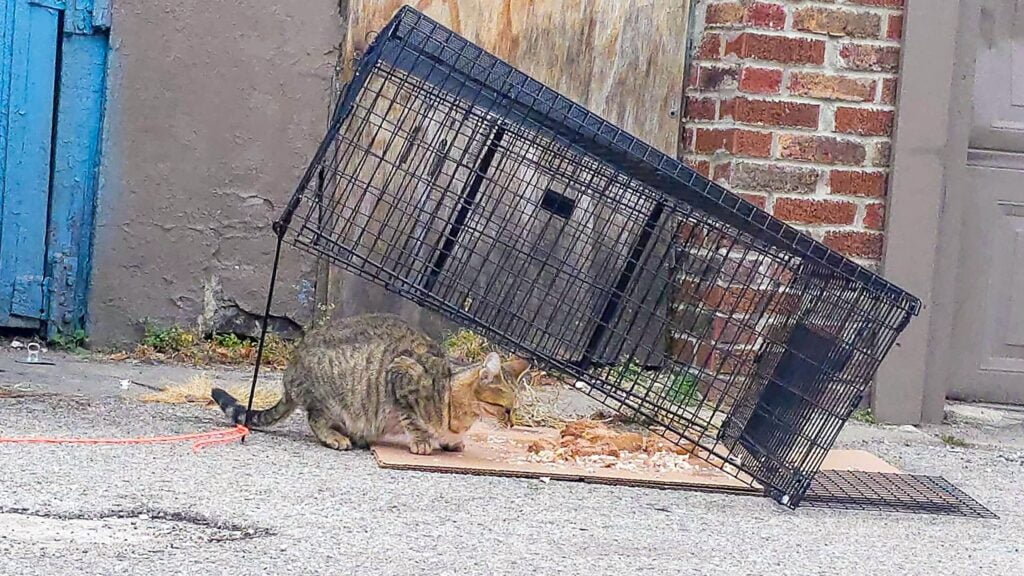 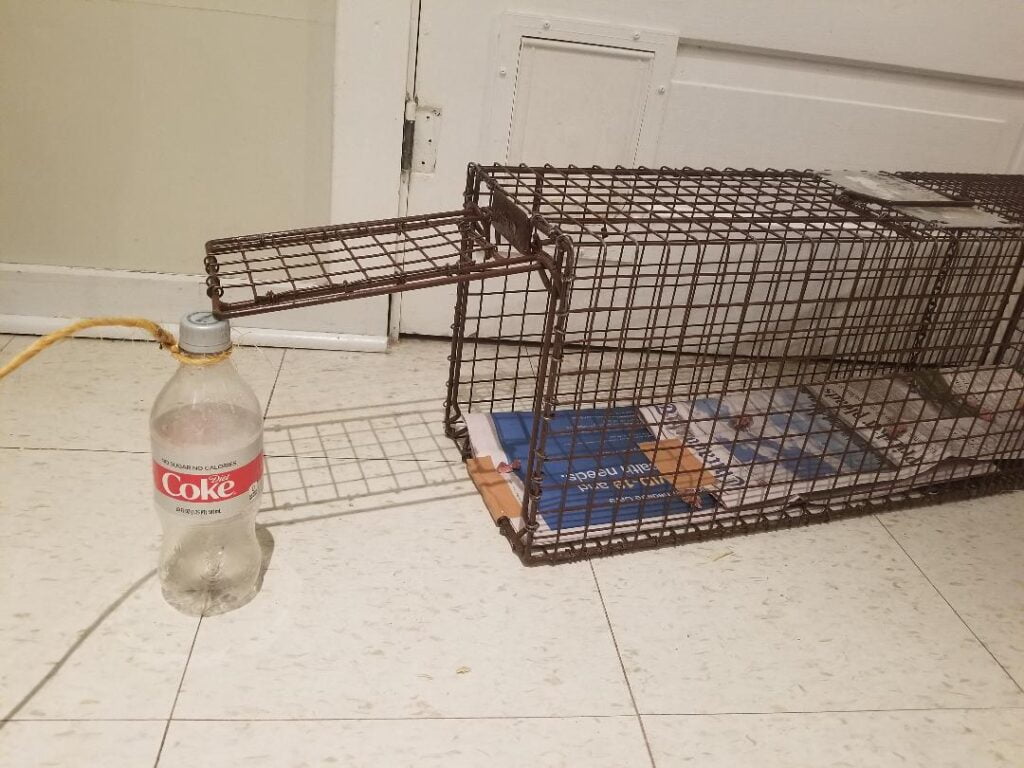 Sometimes cats will go part way into a trap, but won’t go all the way to the back to trigger the trip plate. In this situation, you can use the water bottle trick to trigger the door as the cat goes part way into the trap. Place a bottle under the corner of the trap door to hold it open. The trip plate can remain in the down position. Tie a long string to the bottle and hide out of site where the cat can’t see you. When the cat goes about half way into the trap and the cat’s tail is entirely inside the trap, swiftly pull the string so that the bottle falls down and the door closes. You can also use the water bottle trick if you are out trapping and your trap door is not closing because the trap is rusty/sticky, or in situations whereby you need to trap a certain cat from a colony.

The Engine and Caboose

The Engine and Caboose method is most commonly used when trapping a mama and kittens. If you are not able to trap a mama and all of her kittens at once, you can place an open trap lengthwise like train cars against a trap containing  the cats already trapped. Pull up the trap covers between the traps, so a cat entering the open trap can see all the way through to the cats already trapped. Often kittens will cry once trapped, which will help to attract mama or other kittens. 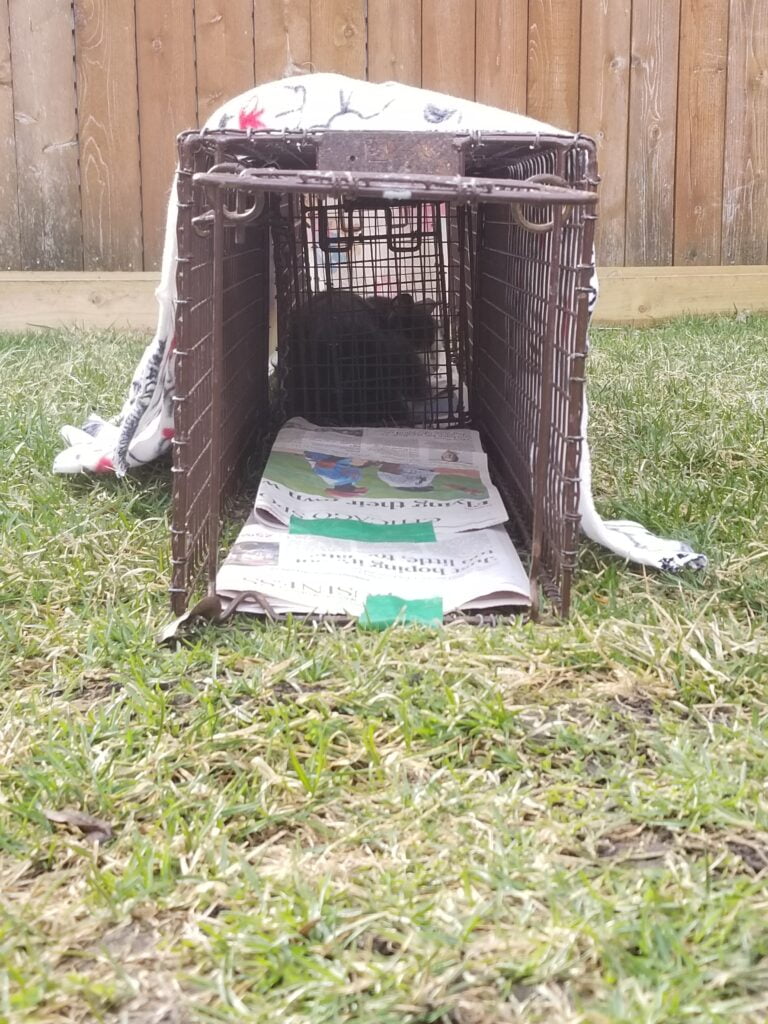 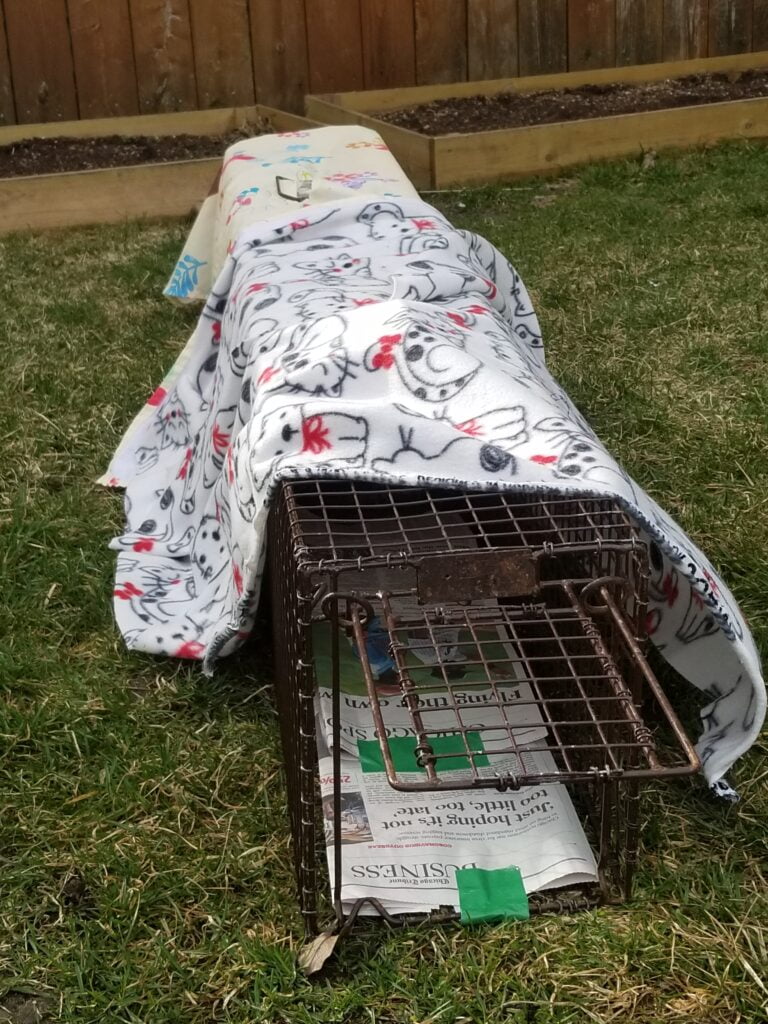 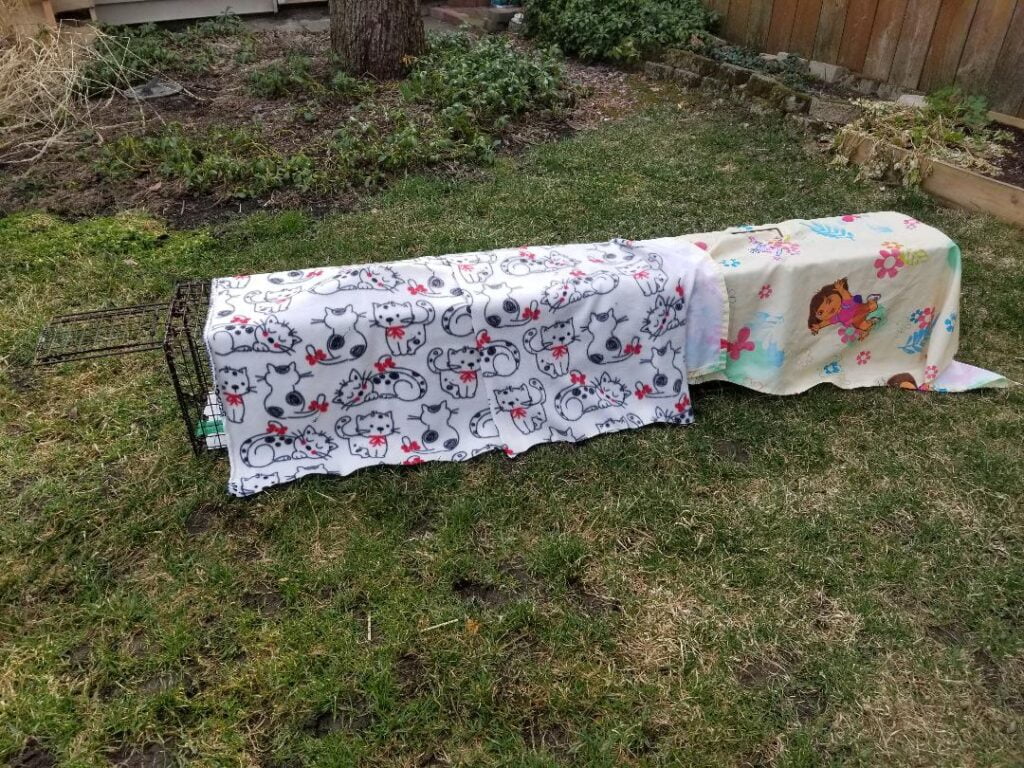 Playing recorded sounds of cats crying or meowing is also effective in attracting them, especially kittens. On YouTube, you can search for “mama cat calling kittens” and find many free videos with meowing sounds. To avoid having to keep tapping your phone to play the video again and again, YouTube lets you create a play list and add the same video as many times as you like.

Below is a comprehensive list of pointers from Alleycat.org

When you’re conducting Trap-Neuter-Return (TNR), some cats may be particularly hard to trap. They might be too suspicious of entering the trap, or maybe they keep getting the bait without triggering the trap door. Don’t worry—you’ll get them! Try these 18 tips:

1. Get them comfortable with the trap.

Feed trap-shy cats out of unset traps in their normal feeding locations for a week or two before trapping again. Start with the food right by the entrance of the trap and gradually move it closer to the back each day.

Cats don’t like to feel trapped or boxed in. A larger trap with a taller opening and wider sides can be more inviting to a cat wary of entering an enclosed space.

By placing a dark towel over the trap, without blocking the door, you create a space that looks dark, hidden, and safe to cats.

Something extra smelly and tasty, and perhaps out of the ordinary, might pique a cat’s interest. We have lots of suggestions for safe and tasty treats! Try jarred baby food, canned mackerel, or chicken.

Coax wary cats into the trap with a trap of tiny food scraps leading up to and then inside the trap. Gradually increase the size of the bait scraps as you place them on the trigger plate and beyond. Make sure you don’t use too much; you don’t want the cat to get full before she reaches the trigger plate! You can also try using the smelly broth of canned cat food or meats as your bait trail.

Move the trap to a quieter, protected place so the cat feels safer going into it. The more secluded, and the less people around, the better.

Just like you have paths you walk every day, so do community cats! Be observant and watch for the trails that cats most often take. Note if there’s a certain tree or bush they like to sleep under, and what time of day they’re most likely to be in a specific area. Set up the traps at these places and times.

Some cats can be guided into a trap with a laser pointer, which you can control from a distance. Or try hanging a piece of cooked chicken from a string above the trigger plate to trick the cat into springing the trigger.

Try covering the trap with natural material like burlap. Then, place leaves, small branches, palm fronds, or whatever is in the natural environment around the top, sides, and on the floor inside the trap. Just make sure your disguise doesn’t interfere with the trap door closing! Run a test before setting it up for the real deal.

A cat may have learned to recognize the plate that closes the trap door and how to avoid it. To keep her from tiptoeing over and around the plate, try covering it, and a bit of the trap floor in front of and behind it, with newspaper or cloth.

Or cut a piece of cardboard a little narrower than the width of your trap and a couple of inches longer than the trigger plate. Duct tape the cardboard to the middle of the plate and loosely to the floor of the trap. The cats won’t be stepping around that trigger so easily!

For cats who have learned to step lightly to avoid triggering traps, slide a stick through the side holes of the trap just in front of the trigger plate and a few inches off the trap floor. The cat will be forced to step over the stick and her paw will land harder on the trigger plate just beyond it, springing the trap.

12. Spring the box trap yourself.

Prop the box trap door open with a stick or a full water bottle with string tied around it. Use enough string so you can hide a few feet away and hold the end of it. When the tricky kitty walks into the trap, pull the string to manually shut the door.

If the standard box trap just isn’t doing it, try using a drop trap It’s a large mesh box that you prop up and trigger manually with a rope or string. Make sure to set the drop trap on flat ground and to have a partner, as the traps’ size makes them awkward to handle alone. Prop the trap up with a wooden stick or a full bottle tied with string, leaving enough string so you can hide a few feet away and hold the end of it.

Bait the trap with plenty of food just in case cats you don’t want to trap wander in before your target. Don’t spring the trap until your target cat is inside; if she sees other cats being trapped, she’ll stay away! Once you’ve sprung the trap and caught the cat you want, immediately place a sheet over it and get a box trap ready. Transfer the cat to the box trap to easier hold and transport her.

14. Lure the cat into a more confined space.

It’s easier to trap when you don’t have to do it in the great outdoors! Place food into a smaller space you can close in on, like a garage or shed. Hide and wait for the cat to enter, then shut the door behind her. Before you lure kitty in, get the room ready.

Clear the space of any possible hiding places, then lean a single large board against a wall. Set up a box trap and hide it behind the board. When the cat is locked into the smaller space, she’ll immediately try to find the nearest hiding spot. Since you only left her one option, she’ll dart behind the board and possibly right into the trap.

If your hard-to-trap cat likes to circle around the back of the trap instead of entering it to figure out how to get the food, use that to your advantage. Place two box traps right next to each other, with their entrances facing opposite directions. When kitty circles around one trap, she may walk right into the one set up beside it.

Kittens are a powerful lure for avoidant mother cats. If you manage to trap her kittens first, put them in a carrier or another box trap and place its door against the back end of the trap you plan to use to catch mom.

Place a dark sheet or towel over everything but the entrance of mom’s trap. Mom will think she’s seeing her kittens through a dark tunnel and will enter her trap to get to them. If it’s chilly out, keep the kittens warm by lining their carrier or trap floor with a towel and placing a couple of hot water bottles beneath it.

If a shy kitten or a mother cat refuses to enter a trap, your cellphone may just help you out. Find a video of kittens meowing and play it on your phone, then place the phone at the back of your box or drop trap. Kittens who are scared and alone may race to join the “other kittens” in the trap. The mother cat may think her kittens are calling for her and enter the trap to find them.

18. Take a break from trapping.

Unless the cat is in need of immediate medical attention, take a break for a week or two. Give yourself and the cat a rest, and then try again. You’ll get her eventually!